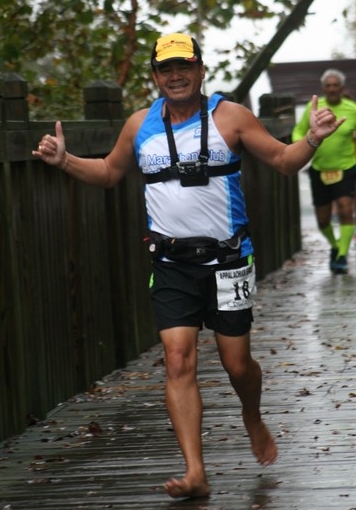 There always seems to be at least one person in every marathon that everyone notices. It could because of their outfit, a sign that they are wearing, their footwear—and, in some cases, their lack thereof. Most people don’t give a second thought to other people’s shoes, but that is what most marathoners notice first about fellow runners: their choice of sneakers. When someone is running barefoot, that really stands out. The thought of running 26.2 miles is crazy to most people, but the thought of running 26.2 miles with nothing on your feet is insane even to most seasoned marathoners. If you ran in any of Mainly Marathons’ events last year, chances are you ran with the most prolific barefoot runner of all time, Eddie Vega.

“The Barefoot Bandito,” as he is affectionately known on the marathon circuit, ran with no shoes, no socks, no Band-Aids, no anything on his feet in 101 marathons last year. He also ran every event with a camera strapped to his chest and an admirable cause sitting in his heart. Eddie grew up in Guam, and often had no shoes as a youngster. Those memories stayed with him throughout his life, and in 2014 he dedicated himself to raising money so other children didn’t have to go shoeless. He runs for an organization called soles4souls, which provides shoes for kids in underdeveloped countries, and he raised enough money last year through running to donate over 10,000 pairs of shoes to the cause.

Running over 100 marathons in a year is not easy for anyone, and even more difficult if you’re not wearing shoes and aren’t protected from the natural elements. Eddie ran on all types of surfaces, and his feet suffered greatly. More often than he would like to recall, he had to stop and pull glass, stones, thorns, burrs, and all sorts of other things out of his feet, not to mention stepping in what animals had left on the course. He even ran a marathon barefoot in Antarctica, in freezing temperatures and on razor-sharp rocks. Through it all, you would always catch him with a big smile on his face. He did it all for the children, and was an inspiration to all.

I asked Eddie to share his Mainly Marathons race experiences, and he was kind enough to send me a great email. The following are his words:

“The most difficult of the three goals to accomplish, however, was to complete a barefoot marathon in all 50 States. It required a substantial amount of planning in terms of logistics and scheduling. It also added much more to the expense especially when I was having fly between different states in different time zones to run back-to-back marathons on the same weekend. And, since many States do not have many marathons there was little room for error, otherwise, it also created a scheduling problem downstream with other marathons.

“This is where the Mainly Marathons series helped me achieve my goal. It was my saving grace when I missed running marathons in a State that I needed due to injury, flight delays and when I got hit by a car. Mainly Marathons gave me an opportunity to make up a marathon on the States I needed that were particularly suited to my schedule since most of the marathons were held on consecutive days and in a different State.

“If it wasn’t for the Mainly Marathons series I don’t think I would have been able to complete all 50 States in 2014. Nothing ever goes according to plans and, although, I had all 50 States mapped out and ready to attack things just happen along the way that you don’t plan for. For instance, the State of Michigan was one that I attempted twice and failed twice due a DNF because I got hit by a car and the other was a DNS due to a flight delay. My saving grace was Mainly Marathons when I completed the Niles Marathon in Michigan which was my last opportunity to chalk off the State because the rest of the year was already fully booked with per-paid registration fees and, worst, pre-paid non-refundable airline tickets.

“Lastly, because most of the Mainly Marathons series were held during the weekdays I was able to fill in and replace marathons that I missed during the weekends. This allowed me to be able to achieve my other goal of running 101 marathons in one year. If you do the math, I would need to average about 2 marathons every weekend to be able to achieve this goal. Well, because of injuries, logistical issues, scheduling conflicts, etc. there were 19 out of 52 weekends that I ran only one marathon. Mainly Marathons was again my saving grace and allowed me to do some serious catching up because many of the scheduled marathons were held during the weekdays.”


We are glad to have helped Eddie achieve his goals in 2014, although we played a very small part in all that this man accomplished. There aren’t many runners, or humans, that have as big of a heart as the Barefoot Bandito, or such tough feet. Next time you see him out on the course, make sure you say hello. If you would like more information or to donate to souls4soles, please visit www.barefootbandito.com. 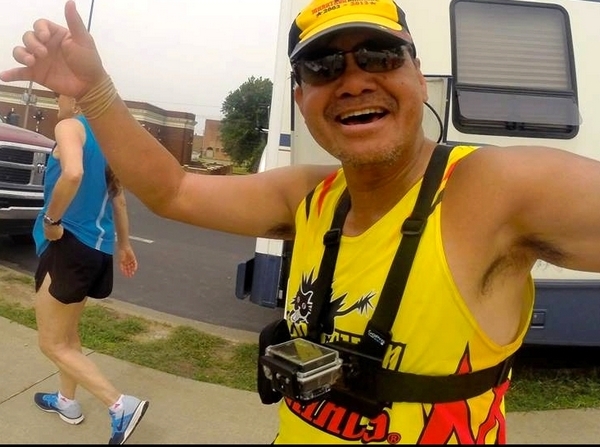