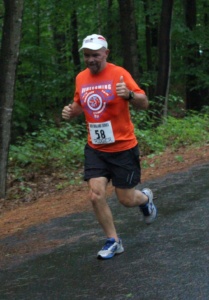 Throughout the years of our existence, Mainly Marathons has had the pleasure of hosting thousands of runners. All leave a piece of themselves, a story to tell, and a place in our hearts. Some take these things quite literately, and probably none more than Roger Smothers. He took a tumble on more than one occasion, leaving a little of himself on the course each time. In doing so, he gave us many stories to share and laugh about, and no one laughed harder at these than Roger. He had a big place in our hearts as well, probably because he had the biggest heart on the course. Roger passed away on March 2, and we miss him tremendously. Below is a little about the man and what he accomplished on the course, which is more than most. But what really set him apart from the rest of the field was his smile, his humor, and willingness to be everyone’s friend.

In total, Roger ran all or parts of 16 series with us. His first was our second, the 2013 Center of the Nation Series. I ran that series too, but don’t remember him well. Probably because he ran all 5 marathons in under 5 hours. Three of those were under 4:30, at age 63. I was well over 5:30 for all of them, and I’m sure he was well on his way to the next race by the time I crossed the finish line. In 2014 he ran 3 series; Heartland, Center of the Nation, and Appalachian. The Appy series is where I first remember Roger well. Before the first race in Bluefield, Va my wife and I ate at the local Applebee’s. I got talking to our waitress about the series, and a gentleman across the Isle from us said that he too was running the race. That was Roger, eating alone. We joined him for a few minutes, then had a very pleasant conversation with him for the rest of his meal. I do remember him running very well (as always) that series, and always with a smile on his face at the end.

In 2016 he ran 7 of our 9 series, only missing CON (which he had already run twice) and Day of the Dead. Our very first race that year was March 8 at Ute Lake in Logan, NM. We had gotten to know Roger a little bit up to that point, but he announced his presence with authority that day. The course was an out-and-back consisting of two loops over the dam and around the lake. On his first lap he somehow got off course, and had to climb over rocks and boulders over the dam to get back on track. When he came into the staging area, he was all bloodied and scraped up from a nasty fall he took. We were all very concerned, all of us except Roger. With a big grin on his face, he said “If your going to be stupid, you have to be tough.” That was Roger, always making the best of what life threw at him. Later that year he took another hard tumble in Delaware during the Independence Series. Again, he came in all scraped and bruised, and a little bloody. After that, Clint made a special cone that said, “Roger, Please don’t fall.” We used that cone every series since then. Roger got a big laugh out of that. That cone is now retired. 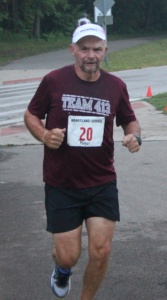 Roger was always a fast runner with us, and on other courses as well. We didn’t see him much during 2016, probably because he was out qualifying for Boston, which he did at 4 different races. He also ran Boston last year, with an incredible time of 4:00:40 at age 66. In 2015, he ran 52 marathons in 51 weeks and achieved Titanium status with Marathon Maniacs. He also had run 50Ks, 50 milers, and a few other ultra distances. His total of all races of a marathon or longer was 119.

He only started running in 2005, after a 26-year-career as a softball player. He said he played two nights a week and a whole lot of weekends during those two plus decades, and finally realized he wasn’t getting any better. His wife Gayle (who could be found volunteering at Mainly Marathon events while her husband of 49 years was out running), talked him into running a 5K with her. Soon he was running more 5Ks and some half-marathons. But he found his passion at the marathon distance, and the rest is history.

Besides being an exceptional runner on the course, he was more remarkable in real life. Gayle told me Roger participated in mission trips with his church visiting in Africa, the Dominican Republic, India, and the Navajo Indians in New Mexico. He also coached boys baseball & basketball at a local Christian school. “He was always ready to help”, she said. That really sums up the Roger we knew. He was always ready to help other runners along their way with a smile or a quick word of encouragement. He left the course way too soon and will be missed by his Mainly Marathons’ family. 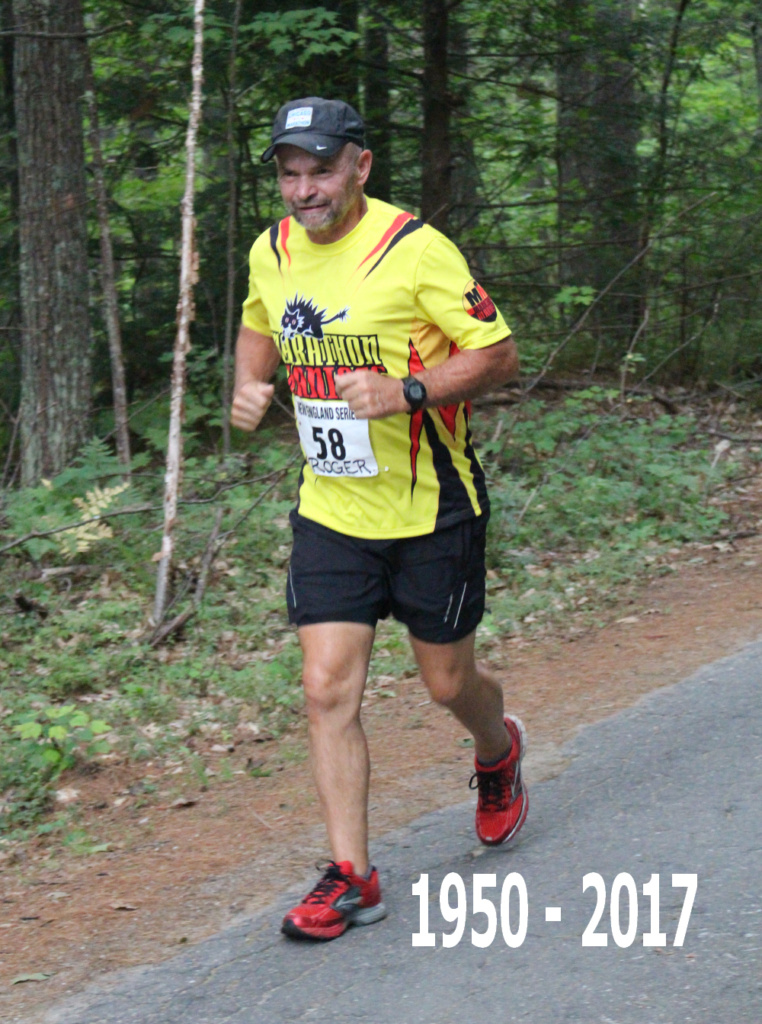